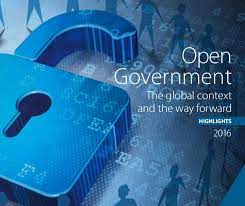 The global context and the way forward

This highlights presents selected key facts, findings and recommendations of the Report Open Government: The Global Context and the Way Forward. The Report is based on the responses of more than 50 countries to the 2015 OECD Survey on Open Government Co-ordination and Citizen Participation in the Policy Cycle, as well as on the findings of the OECD Open Government Reviews. In addition to all OECD countries which answered to the Survey, thirteen countries from Latin America (including the two OECD member countries Chile and Mexico) submitted their answers, as well Indonesia, Jordan, Lithuania, Morocco, Philippines, Romania and Tunisia. The global diversity of the responding countries allowed the authors of the Report to draw conclusions on regional differences and provide a solid evidence base for the analysis of open government reforms. The OECD Survey is a direct response to the request to collect better data on the design and implementation of a single open government strategy and initiatives made by OECD member countries and non-member economies that participated in the OECD Open Government Forum, held in Paris on 30 September 2014.